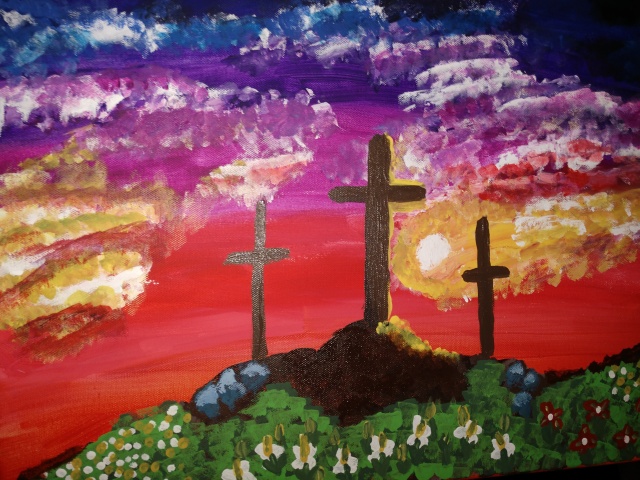 The one most important thing to all of us is to feel loved. I know of one who truly loves you more than you can ever know.  To say that a person loves us is something that we all hold dear to us.  Jesus, the son of the most high God loves you with an overwhelming love.  …A love that we can not fully grasp.  ….A love beyond measure. …A love that protects us, feeds us, guides us, shields us.  …A love that is willing enough to die in our place.  ….To become the everlasting sacrifice.

Jesus is the son of the most high God.  He is the king of kings.  He was in the beginning with God.  He had no worries.  He was protected in his own kingdom.  He was an eternal king.  ….The richest king that had everything.  ….Including love.  He left his kingdom to come to an earth full of sorrow, troubles, hardships.  Why?  Because he had a love that not one of us can truly know until we see the Father.  See God the Father is the very definition of love.  He created us in his own image.  He loves his own creation.  He wanted fellowship with his creation in the beginning.  He made Adam and he talked with Adam and gave him a help-meet; a woman named Eve.  Until one day sin entered the world through the disobedience of man.  Sin separated him from walking with man, so he sent his only begotten son to become the sacrifice; the atonement for sin.   God tells us in his word, the Bible, that without shedding of blood is no forgiveness.  Hebrews 9: 22-without shedding of blood is no remission.  So Jesus became the sacrifice on the cross.

Jesus suffered a lot on the cross; he suffered excruciating pain in our place.  See Jesus didn’t die for himself; he died for us.  We are the ones who have sinned.  We are all guilty. 1 John 1:8 says: If we say that we have no sin, we deceive ourselves, and the truth is not in us.  John 3:16  says: For God so loved the world, that he gave his only begotten Son, that whosoever believeth in him should not perish, but have everlasting life.

We can have that everlasting life if we trust in Jesus as our Savior. Acts 4:12 says:  Neither is there salvation in any other: for there is none other name under heaven given among men, whereby we must be saved. Revelation 1:5 says:And from Jesus Christ, who is the faithful witness, and the first begotten of the dead, and the prince of the kings of the earth. Unto him that loved us, and washed us from our sins in his own blood,

I am a born again believer who has taught Sunday School, Women's Meetings and written blogs and books for the purpose of the ministry. My sole purpose is to spread the gospel of Jesus Christ. I believe Jesus, the son of God, died on a cross for the sins of the whole world. I believe he arose after three days and now sits on the right side of God in Heaven. I believe Jesus Christ is the only way of salvation. Without Jesus, there is no remissions of sins:
View all posts by Tracy K →
This entry was posted in Uncategorized and tagged bible, death on the cross, Easter, eternal life, Jesus, Jesus Christ, love, sacrifice. Bookmark the permalink.

Encouraging Women To Draw Closer To Christ From The Inside Out