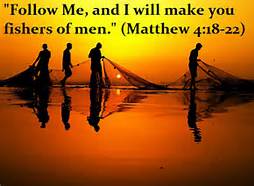 Often I listen to CD of the Bible read to me as I drive to work.  This week I was listening to the Gospel according to Luke Chapter 5.  Jesus had entered Simon’s ship and he said into him, “Launch out into the deep, and let down your nets for a draught.”  Simon Peter didn’t want to because he had fished all night and caught nothing.  But because Jesus asked him to, he said, At thy word, I will let down the net.  After he had done what was asked, he caught a great multitude of fish and his net brake.  So he asked his partners to come and help them.  After both the ships were filled and began to sink, Simon Peter fell down at Jesus’ feet and said, “Depart from me; for I am a sinful man, O Lord.

Jesus said to Simon, “Fear not; from henceforth thou shalt catch men.”  And when they had brought their ships to land, they forsook all and followed him.   What amazed me was that it said, ‘They forsook all’.  It didn’t say they hurried and got their fish sold and then followed Christ, but they forsook all they had.  This amount of fish must have been worth quite a lot of money.  They seen something in Jesus, where they obeyed him.  Matthew 4:20 tells us that they ‘straightway left their nets and followed him.’  Webster dictionary tells us that straightway means: right away and immediately.  They didn’t hesitate or question where they were going.  Jesus was telling his disciples that one day they would catch men, by sharing the gospel of Christ to them.  This showed how great their faith was in Jesus, to forsake all they had and follow him.

Many times when we know we need to do something, we might hesitate or question whether it is what we are suppose to do.  God left us a perfect road-map, called his holy word, the Bible.  It gives us direct commandments of what God expects from us.  One great commission Jesus told us to do was to ‘Preach the gospel.’  Luke 14:23 says, “And the lord said unto the servant, Go out into the highways and hedges, and compel them to come in, that my house may be filled.”  See Jesus expects his followers to do the same as he expected his disciples to do, and that was to catch men. I know I have heard many times how God laid it on someone’s heart to witness to someone.  Well, I believe God does just that.  His Holy Spirit works through his servants, which are preachers, teachers and children of God, to share his gospel.  The gospel of Jesus Christ is this: For God so loved the world, that he gave his only begotten Son, that whosoever believeth in him should not perish, but have everlasting life (John 3:16).

John 1:12 says,”But as many as received him, to them gave he power to become the sons of God, even to them that believe on his name:”  God gives us that power to share the gospel to the world.  He said he would never leave us or forsake us.  He said he would strengthen us where our faith fail not.  Praise be to God for his son, Jesus Christ.

I am a born again believer who has taught Sunday School, Women's Meetings and written blogs and books for the purpose of the ministry. My sole purpose is to spread the gospel of Jesus Christ. I believe Jesus, the son of God, died on a cross for the sins of the whole world. I believe he arose after three days and now sits on the right side of God in Heaven. I believe Jesus Christ is the only way of salvation. Without Jesus, there is no remissions of sins:
View all posts by Tracy K →
This entry was posted in Uncategorized. Bookmark the permalink.